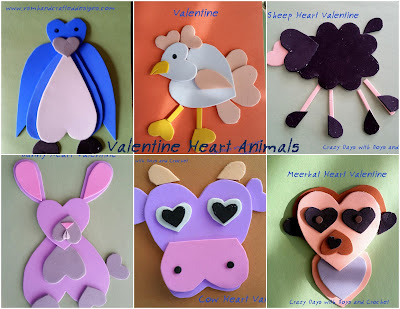 Thought it would be fun to do some more heart animals and the have the boys use them for their Valentine's Day cards for their teachers. I figured let them inspire what would come next from that point. While eating lunch, I asked them both what animals they wanted to try and make using mostly/only heart shapes. My youngest piped up with "cow," "black sheep" and "chicken." Those all sounded do-able. My eldest's first round was National Geographic worthy and I wasn't too sure I would be able to do much of anything with just hearts. He kindly compromised and altered it to a "meerkat," "little blue penguin" (no, it's a real deal animal not just a color), and a "rabbit." Far more able to work on those three concepts!

You'll have to pardon the lighting on these pics. We needed to get these pulled together today since this week is crazy and these needed to get done before Thursday. I'll explain what and where I can but the pics should give you the idea. Also, I know there is a touch a macabre by saying the "animal heart" aspect, but rest assured, I'm talking heart shaped!

Also, these are not a step by step how to. Instead I have a picture of all the hearts and shapes you'll need and then a picture of the final result. The description will include some needed steps that might not be so obvious at first glance.

*All animals will need to be assembled onto a piece of paper. We decided to fold construction paper into a card and then assemble the animals onto that. We also used the sticky foam paper for the heart shapes to make it a bit quicker and not have to worry about drying time.

This was the most challenging to capture since the animal is so sleek and monochromatic. But a little image searching and lots of thinking outside the box helped us get this little fellow created. 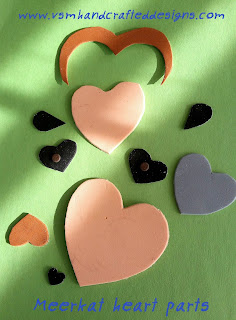 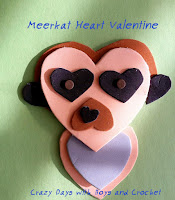 From the picture you can see I used a medium brown, gray, black, and peach for the meerkat colors. I would suggest printing out the heart forms from my What a Hoot! Owl Valentine post. These will make life easier in general when making the animals, but you can always freehand it as well. For the eyes you will need 2 small sized hearts in black and 2 medium brown hole punch size circles. The ears are one small heart cut in two. The chest is a medium heart in peach with a slightly smaller heart in gray. The head is a medium heart in peach with an extended heart top strip made out of the brown. Finally, you have a muzzle with a smaller heart made out of brown and a little heart made in black. Assemble together as shown in the picture and you have a meerkat! 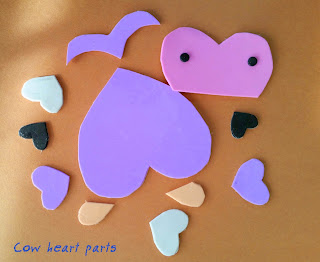 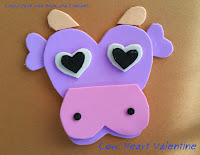 This was far easier to create than the meerkat to say the very least. Once again factor in the hearts and sizes as shown in the picture. My youngest wanted a purple cow, so a purple cow we made. You want a main color, a pink for the nose and lighter color of some sort for the horns, and of course the white and black for the eyes and nose accents. The purple also helped me see that this could easily become a hippo option, too. I would suggest getting rid of the horns and taking the small hearts cut lengthwise in white to act as those big teeth and place them in the mouth area. For the ears shift them up from the side and place where the horns are on the cow version. You want the largest heart from the templates to be the head. Then you will want the second largest one for the nose and bottom lip is a medium sized heart. The nose actually gets trimmed and you snip off the point of the heart. I decided to do the same trick with the top of the heart like in the meerkat for the bottom lip just to cut down on bulk with the sticky back foam paper we were using. If you are doing construction paper, no need to do that. Then it was two small hearts in white for the eyes, and two slightly smaller hearts in black for the pupils. The horns are made out of a small heart cut in half lengthwise and the ears are also the same size small heart. The nostrils are once again the hole punch bits placed on the upside down nose heart. 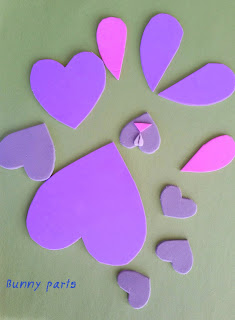 This one is easy, but you will want to freehand a very small heart out of white to make the buck teeth. I used the black marker to draw a line up the center from point to meeting of the curves. I also just drew in the eyes with a marker (not pictured) and nipped off a corner of a paper to make the little nose. You really only need three colors and a bit of white for your rabbit. (We did purple, gray and pink.) For the ears you want a medium heart in your choice of rabbit color with a slightly smaller medium heart in pink for the inside of the ears. The head is also the same medium as the outer ears. The muzzle is one of the smaller hearts, as are the paws and tail. The body of the rabbit is the largest heart with one of the medium hearts in an accent color to act as the chest fluff. For sanity's sake, it was so much easier first putting the layers of the ears together, then putting the nose and teeth onto the muzzle. Once we did that, we started to put the rest of the rabbit together. Otherwise, it got very complicated keeping in mind which areas to not press down on or glue before doing another part of the body. 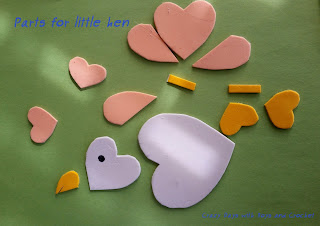 This proved a little more complicated than I thought, but it still was a fun one for my youngest to pull together. You want to pick out a main color for your hen. He wanted white. From that choice you'll want a color for the wing, tail feathers, and accent head feathers. He went with peach. You also will need yellow for the beak, legs, and feet. The body is a medium heart with the head a slightly smaller size. The tail feathers and wing are also the same size heart as the head. Then the head feathers and the feet are both the smallest size heart. The beak is also the smallest heart but you only need half a heart to make it. I nipped a little slit at the point to create the upper and bottom beak look, but you can easily just use the marker to create the same idea. The legs are just long thin rectangles I cut by hand. You do not need to be exact with them since they may need some trimming depending on where your kiddo decides to place them. 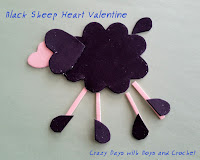 Yes, this can also be a poodle. My older son and I realized this after it was assembled in black. The inside of the card has a funny little line about counting sheep so I figured that should help get the idea across. Probably what needed to happen was placing the head up and out a little more and making the legs black as well, then switching the size of the hearts. A slightly larger heart in peach and the the other half of the small black heart from the tail would've helped the overall look... The youngest was thrilled so really that's all that mattered at the moment. The body of the sheep is actually four of the medium hearts worked around each other. Make sure to check out the photo detail to the left to see how that came about in form. You will then also want 2 small hearts in black for the hooves, cut them in half lengthwise. The face is made up of a small heart in a peach color and then a slightly lager heart in black (keep if this way if you want the poodle look). The tail is half of a small heart in black. The legs, again, are the freehand narrow rectangles that you can trim as needed. After it was all assembled I used the marker to put an eye onto the face. 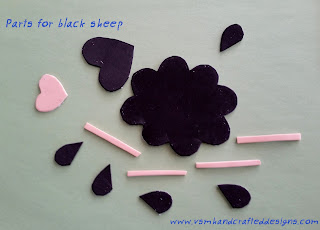 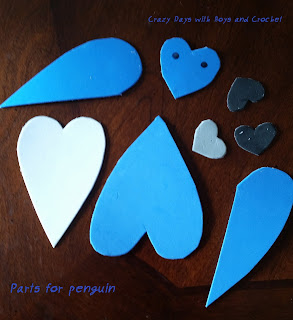 Both the boys are learning about penguins so when the oldest mentioned this specific penguin and we asked if it was real, we figured it had to be, what with the way they both began rattling off details. The best part is they go to different schools! This guy is pretty simple but I did end up freehanding a more elongated and narrow heart for the body and wings. The rounded out hearts from the templates were too baby penguin looking, but if you like that, then go ahead and use them! The head is the largest of the small hearts from the templates and the beak is the small heart, as are the two feet. You do want blue for the wings, head, and body, and then white for the belly. The beak is a gray color and the feet a sharp black. To keep it easier, I also used the marker for the eyes again since the hold punch size was just too big.

Again this isn't a step by step for each one simply because of how extensive that would be. With the use of the templates and a read through of the owl post, though, you should be able to pick up on what to do. Good luck and have fun!