I try to give handmade when I can for special events and as gifts for those near and dear to me. This winter, I decided my nieces and nephew were going to get some fun animal/character hats as part of their Christmas presents. The first hat was rather easy to create since my one little niece is obsessed with all things Disney. So a couple of familiar round ears and touches of red made for a sweet, girly mouse hat for her. The best part is that she just so happened to be wearing an outfit that perfectly coordinated with it when she opened it! (Please do keep in mind though that this hat is not an option for sale) 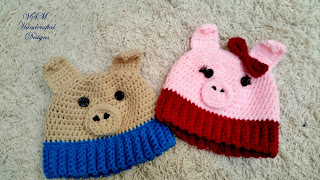 This next set I made up for the other niece and nephew since they are a pair of siblings. I got it on good authority that they are a big fan of pigs at the moment, so I made up a couple of cute piggy hats for them. Sweet little snouts, button eyes, and a bow added to the little girl piggy certainly amp up the "awww" factor. These are hats I am happy to customize and recreate since they are of my own design. I can even make up other animal theme hats like lambs, cats, bear, and puppies.

Seeing me make some hats as gifts for those near and dear to us, my son wanted to jump on the handmade band wagon and asked that I make hats for his friends instead of buying some toys at the department stores. Quite honestly, I was so touched that he gave the particular themes of the hats such careful thought. He wanted to be sure it would be something his buddies would really like. In the end it was to be a Creeper hat for one friend and an ear flap hat with a Pokemon ball theme for the other. Both were much appreciated and now that it's finally getting cold in our region, they will hopefully get some use. (Again, these hats are not for sale.)

The last pair of hats were made for a very personal reason. Last year, I lost my friend to domestic violence, and it's something that will always stay with me as well as the two children she left behind. Before she left this earth, she had ordered a matching mother and daughter scarf set for her daughter and self in the early fall. After she got them she mentioned how she wanted to order a couple of hats for her son and daughter but closer to the Christmas season. As life goes, we lost track of time and never got to that particular order. She was then gone only two days after Christmas of 2014. Perhaps it was a means of closure for myself, but it was also something I wanted to do in honor of their mother. I decided that I would make a hat for each of them as Christmas gifts. For her daughter, I went with a little lady bug. For me, a lady bug visit always means my friend is near by and saying hello. I couldn't believe how many lady bugs I saw those first few months after her death and I thought it fitting her daughter should have a lady bug hat. Her son is a fan of baseball, so for him I went with his favorite team's colors in a simple stocking cap design. 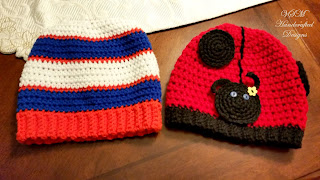 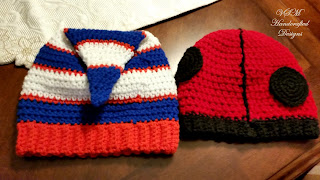 When making something for someone else, the gift is inherently special and unique. Each of these hats will mean something special to me, and hopefully to those who get them.

*Why are some hats only for show and not sale? Simple answer, copyright and trademark laws. I can make them as personal gifts for my friends and family, but will not sell them for profit. I appreciate your understanding in the matter. I share my end results here in case there are other people who can crochet and are looking for some fun gift ideas of their own.
Posted by Vanessa Mus at 1:49 PM