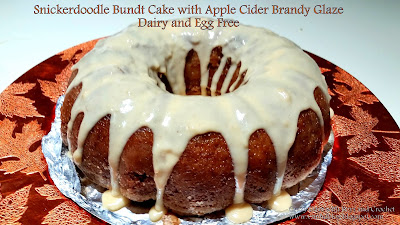 This recipe originated from trying to figure out a good cake for my husband. He's an agreeable chap, who tends to fall into the "it's doesn't really matter to me" group when asked what he wants. Usually, this is completely fine and helpful at times, but when you want to treat him to his favorite dessert for his birthday, it actually doesn't help at all. So, there I sat. Pondering the many sweet treats he's had through the years and figuring out which were his favorites. I noticed he seems to go more for the sweet and cinnamon genre of cakes and cookies instead of the rich and chocolaty varieties. Then I recalled how his love for snickerdoodle cookies surpasses many other sweet options.

Do they even make snickerdoodle cakes though? Well, let's hit up Google and see what I find whilst wandering the internet. And yes, there were recipes for such cakes, but alas, none of them were exactly cakes I would be able to enjoy due to the 1lb call for butter, or numerous eggs to the batter, etc. While reading through these recipes, I managed to find a few that had the potential to work well with substitutions thrown in.

The one I landed on worked as the perfect skeleton to let me rebuild and create a cake that would not only be enjoyable for my husband, but also something I could eat on his birthday night as well. Let's face it, if you have to do all the baking, you want to be able to taste the end results!

Without further ado, because I can't stand those blogs that take forever to get to the recipe, here you go!

1. In a small bowl, combine 1 c of sugar and 2 tsps of cinnamon. Mix together well. Preheat oven to 325. Using coconut oil spray, generously spray a 9 inch Bundt pan, being careful to cover all the nooks and crannies, as well as the center tube. Dust the entire inside of the pan with the sugar and cinnamon mixture. You should only need about 1/4 to 1/2 cup of sugar, try and evenly coat the inside surface of the pan, including the tube. Save the remaining sugar and cinnamon mixture and set everything aside.

2.  In a medium bowl, sift the flour, baking powder, baking soda and salt. Set to one side while you move onto the next step
3. Beat just the coconut oil  on medium speed for one full minute. It will begin to fluff and become a nice opaque white. Add the white sugar and mix for 3 minutes, until light and fluffy. Scrape down the bowl then add the brown sugar and applesauce. Mix for 2 minutes until the mixture looks light brown and uniform in color

4. In a small bowl mix together 1 tbsp of ground flax to 3 tbsps warm water. Let set and then add to the coconut oil and sugar mixture beating on medium speed for 1 full minute. Repeat 2x more then stir in the vanilla. (It helps to mix each round after you've just poured the previous round into the mix. This way the next one is ready after you've beat the mixture for a minute.)

5. Add the flour mixture to the wet mix alternately with the canned coconut milk and mix on medium until well blended.
5. Spread half of the batter into the prepared pan. Sprinkle with 1/4 to 1/3 of a cup of the cinnamon sugar mixture over top. Spread the rest of the batter into the pan and sprinkle any remaining sugar mixture over the top. Take a knife and gently swirl a bit to incorporate the sugar mix into the batter. It does not need to be well mixed. You want it to sort of marble its way through the batter.

6. Bake in the preheated oven for 55-65 minutes, or until a toothpick inserted into the cake comes out clean. Allow to cool for 10 minutes before inverting onto a wire rack to cool completely. If the pan is still hot to the touch underneath, then wait until it cools to a comfortable warm.

Instructions
1. In small sauce pan simmer cider and brandy until reduced to a quarter of its original volume. Make sure to watch this and stir often to prevent burning. This also brings a caramel undertone to the glaze.
2.  Pour reduction into confectioners sugar until it makes a runny paste golden in color. Depending on the day you may find you need to either add more sugar or more water. Do so a tbsp at a time.
3. While cake is still somewhat warm, drizzle glaze over cake to get absorbed into the cake itself. It really adds a great flavor to the cake and the tart tang of the cider offsets the sweeter flavors of the cake.

For the original dairy and egg based recipe go to http://dozenflours.com/2009/03/snickerdoodle-bundt-cake.html
Posted by Vanessa Mus at 2:25 PM