A Fairy Tale Sign Post for Your Garden: A Re- Purposing Project for an Old Tree Trunk 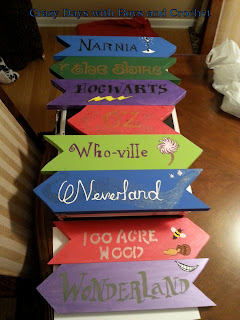 The past two winters have been terribly, awfully, dreadfully cold and peppered with some intense snow and ice storms. Unfortunately, a large holly bush that lived on the corner of the garden in front of our deck lost the good fight after these two harsh years. I decided it best to just start by cutting back its branches and getting rid of them before too many of the leaves withered off and turned into weapons of injury hidden in the grass. Trust me, those little points get razor sharp as they dry.

I hacked away at this bush and its nightshade companion, another potential reason for its demise, and discovered a rather interesting shape underneath. It was one of those "hmmmmmm" moments where you start to wonder if maybe you could do something with what is in front of you. After bundling the branches and having them hauled off, I told my husband I wanted to leave what was left of the trunk. He had no complaints, since it meant he wouldn't need to remove yet another stump.

A couple days later, a fun idea worked its way into my mind. I love it when gardens have a touch of whimsy in random little spots, and in this case, I had a brand spanking new area in my corner garden looking for whatever whimsy it could get. The trunk is a twisted and gnarled formation, and it reminded me of those many trees and posts you'd see in a fairy tale. From there, I thought it would be fun to turn this trunk into a sign post showcasing lands from fairy tales.

First, I needed to come up with some lands that would be familiar to our little family and any visitors who found their way to this part of my garden. With the help of my husband and bookworm friends, we came up with a great list to get us started for this project. Once I explained my idea, my husband was totally on board and actually got the signs cut for me. 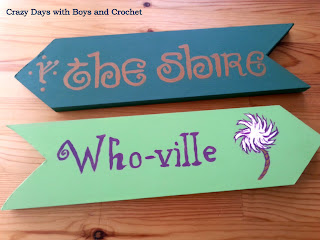 After getting the signs sanded and ready, I began to paint them and then looked to the popular fonts used for the titles of these lands to add that touch of familiar to their appearance. To do this, I just did an image search using the title or name I needed. Once I found an image that worked for me, I just printed it out and then used it as a visual guide while I hand painted the names onto the signs. Along with the names, I decided to add iconic touches to give a nod to those literary works. Something as simple as Gandalf's mark added onto "The Shire" sign brought in that magical aspect to what would have been a little more basic. For "Who-ville" I used the flower that Horton carries around for the motif. This actually became one of the really fun parts, the whole figuring out what to do for each one. 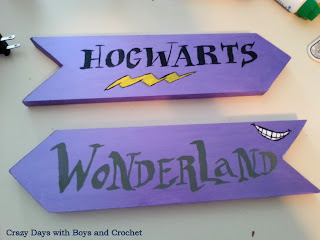 "Wonderland" was almost automatic. Who doesn't recall that large grin left behind by the Cheshire Cat during one of his conversations with Alice? Playing off the idea of things not always being what they seem in that land, I created a fun color for the lettering that almost fades in and out depending on how you look at the sign. Another big must do name was "Hogwarts" from Harry Potter. Of course a lightning bolt was a given. With there being so many iconic aspect to those stories, I went for the one that is practically ubiquitous to the series in its entirety. 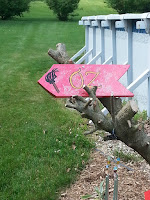 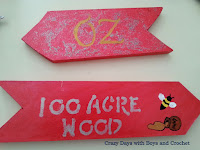 Turning again to more classic stories, I knew I wanted the "100 Acre Wood" from Winnie the Pooh. And a red background was a go to choice in connection to the red of the Pooh Bear shirt so many have grown to know, even though it technically isn't what Pooh Bear wears in his original form. To that sign I added a bumble bee and a honey pot, complete with the wrong way to spell "honey" as you can often see in the illustrations. Next up was the land of "Oz" which was honestly a bit more tricky. I went with the red background as well and tried to give it a sense of the ruby slippers, again another pop culture icon if not true to the original story. The glittery red background and golden lettering looked nice, but I realized after a bit, it came off rather flat. It wasn't until the very last minute I added in a witches broom and outlined the lettering with a thin black line to make the sign look a bit more pulled together. Obviously, the first shot has the before look to it and the second is the after. 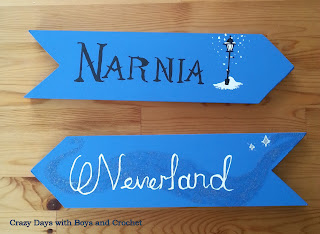 Finally, I got to work on my two favorite lands. First up "Neverland," and I knew immediately how that was going to be tackled. I painted it a rich blue and then used my glitter paint again, only this time to create a rolling path of pixie dust. To that, I added the swirly lettering as a nod to Disney's classic movie and painted the two stars at the other end of the pixie dust path..."second star to the right and straight on to morning" after all. Lastly, "Narnia" was created using bold lettering and then I found myself musing on how to bring in those memories of mystery and magic. At first I thought of the scarf from Mr. Tumnus. But that is actually rather tricky to convey...then some snow flakes came to mind, but that didn't quite do it for me. As I mentally went through the story of The Lion, the Witch, and the Wardrobe, I remembered the lamppost! I knew that was it for me and added onto the sign. A few touches of falling snow and a drift at the base of the lamppost and I was thrilled with the end result.

Even though I had the main part of painting done, I still needed to seal these since they were going outside. That took a bit more time since I needed clear sunny days for the best results. Luckily, the signs really looked great with the clear coating and it helped make the colors stand out even more than before.

Finally, everything was sealed up, completely dry, and ready to go. So out I went with my power drill, a hammer, and some nails and got to work. When you work with a natural item you learn that you really need to be the one that works for that item. At first what I had planned to do with display didn't work because of a few odd knobs and gnarled knots on the trunk. So, I just put all the signs on the grass and picked them up at random to place them where they best fit. This really added to that more cattywampus, fanciful aspect of being hung by a clever gnome caretaker...which come to think of would be a fun addition to that area as well..hmmm.

Anyways, without further ado...here are the end results, for now at least! We actually are thinking of other magical lands to add :) 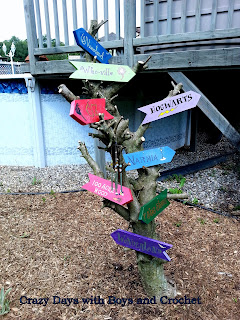 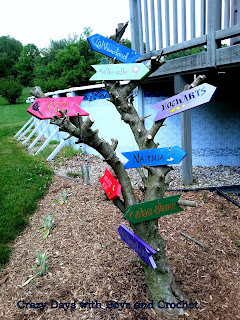