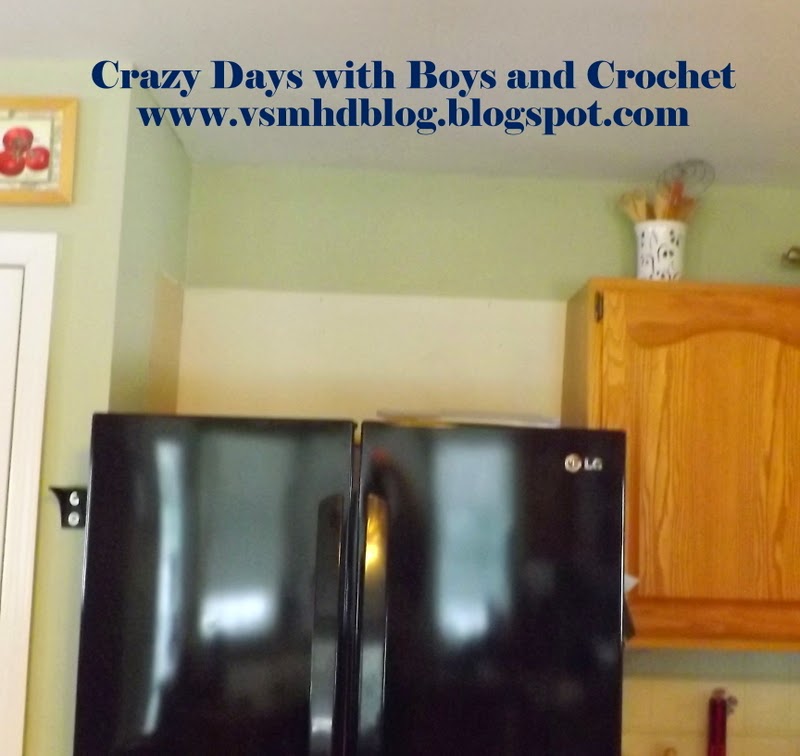 We got a glorious new refrigerator, finally!, but in order to get one that would fit, we knew that the awkward too-high-to-reach-but-too-low-for-a-new-fridge would have to go. We already were battling with a finite width that drastically cut down our options to two fridges, (based on the bells and whistles we wanted), and the last thing we needed was to not have any choice, or have to forgo features we really wanted because of a cabinet we didn't use anyways!

Luckily, the old cabinet came out with no issue once we removed all the screws. However, there was a lovely space of unpainted, and even unspackled, drywall that was left exposed for all to see. Granted, it would be easy to explain to anyone who asked what happened, but honestly, I didn't want to deal with that eyesore while we were on hold with the next few steps for giving the kitchen a face lift.

Perplexed as to what to do exactly, I looked everywhere from kitchen design magazines, to Pinterest (duh), and even brainstormed with my mom. I didn't want to do something super expensive since chances were good we could do something more with that space later on, like a great wine rack above the fridge. But, I also didn't feel like going into the effort of repainting a wall, especially since I know I am changing the color scheme big time when it comes time to redoing the cabinets. 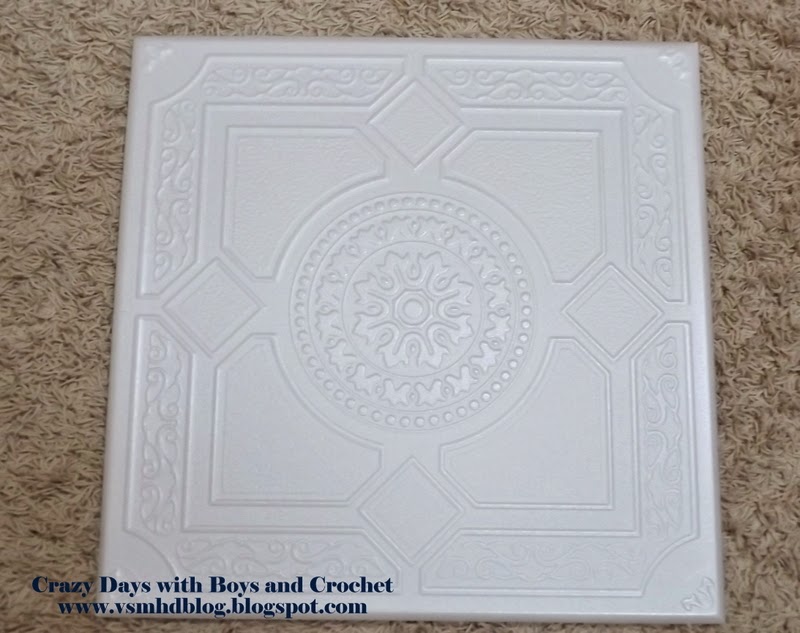 It was when I spoke with my mom that this idea finally came about. I at first thought of maybe just getting some peel and stick back splash style tiles and slapping them up over the vacant spot. But, my mom mentioned something I was also toying with but wasn't sure if it would work. Basically, I took at look at the foam ceiling tiles that are often used to hide the hideous sins of popcorn ceilings, and I thought I could paint them in a metallic tone to take on that hammered tin concept. Mom actually offered up the same idea, so I knew all was good. 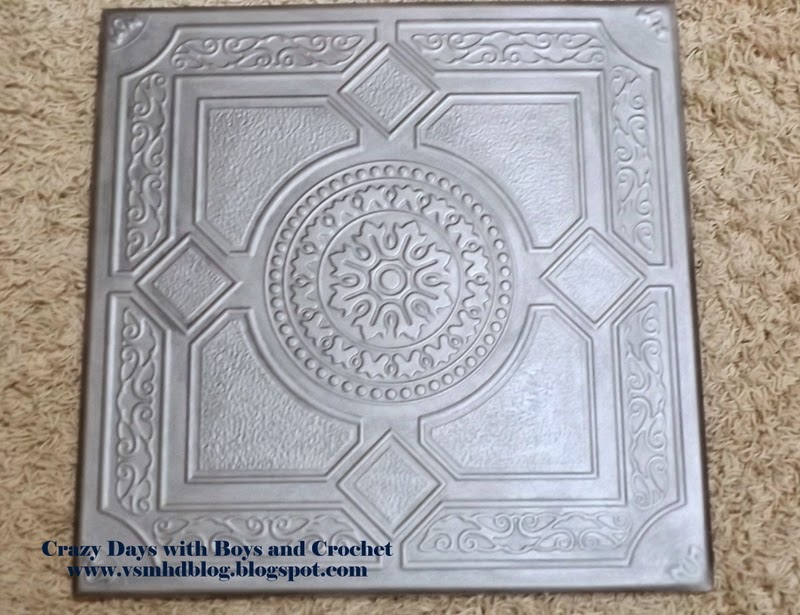 To say this was relatively the easiest temporary kitchen face lift is an understatement. All it took was enough tiles to cover the space in question, some silver acrylic paint, a little wipe on wipe off know how for antiquing the silver with some thinned out black acrylic paint, and then Command strips to hang the uber light foam squares. You can toy around with how you want to place the tiles depending on the size you get, but since I ordered some 20" ones, I decided to feature one dead center on the longer space and flank it with halves of another tile, and then place another full 20" on the side wall, and half of one last square on the flanked cabinet side. 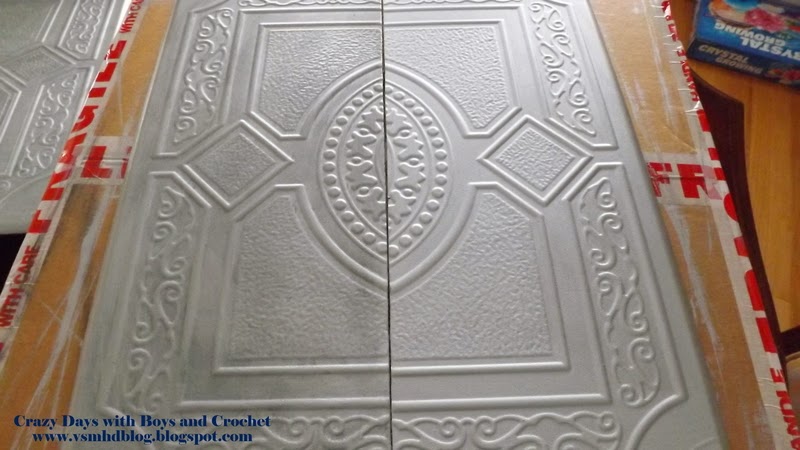 Granted, I had to wait between coats of paint, and fiddle a little to get the right antique look to the final results, but once things got going, it was an easy half day project. I'm super thrilled with the outcome, and who knows, I may just keep it like this even after we redo a few more things! 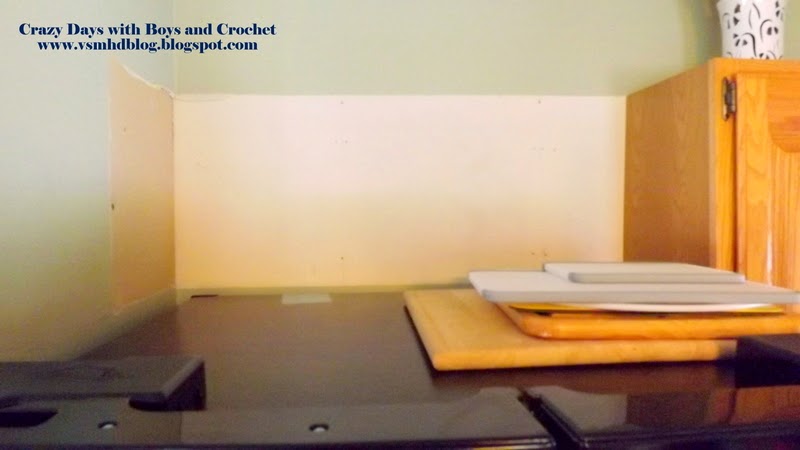 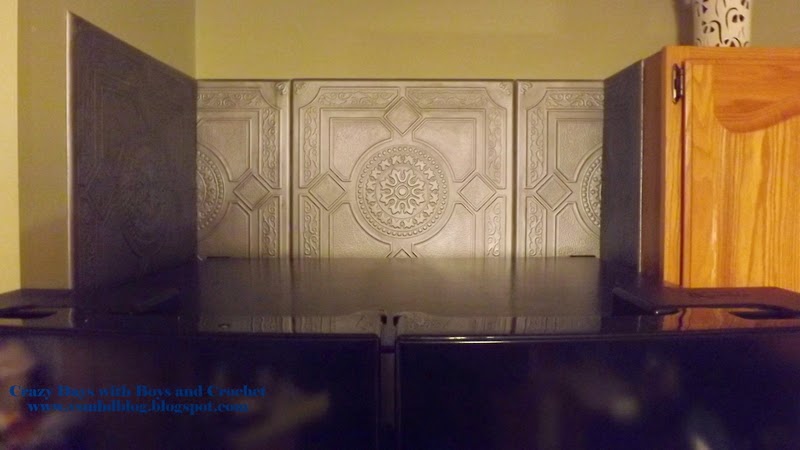 To this beautifully finished off space!