Everything happens for a reason. Although sometimes I question the motive and mentality of others, especially when it comes to abandoned pets, I wouldn't have a sweet fluff ball companion if it hadn't been for some unfortunate circumstances. From what we could figure out, this rusty orange kitty with one heck of a full long coat ended up getting left behind when a family moved out of the neighborhood. We spent a good couple of months putting up posters and spreading the word that we found this great cat, but no response. And after a while, she became ours. 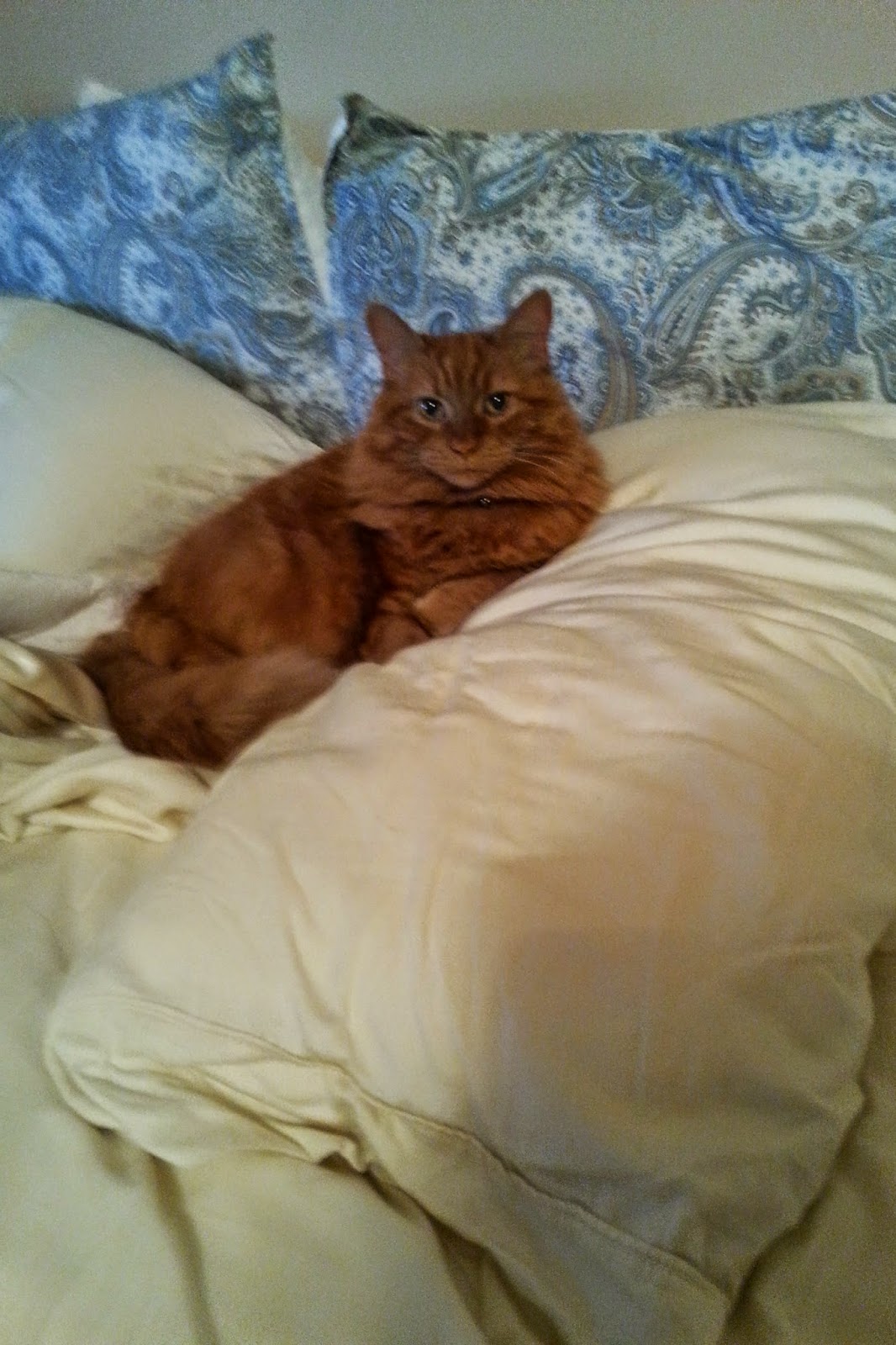 Meet Queenie. I actually first called her Queen Elizabeth since she has that rich red orange coat and a distinct ruff around her neck. Of course, that is a mouthful so I started calling her Queen E, but others heard it as Queenie and there ya go. She's about 10 years old, loves to cuddle, and really doesn't get the whole "graceful" concept of being a cat. I can honestly say, I've never encountered such an awkward creature from the feline society, but this awkwardness is absolutely endearing and is just a part of who she is.

She's a good sized cat with the ability to compact her massive fluff. Like in this picture, she looks so petite and lady like right? Sitting pretty, curiously looking at the camera, and nestled into our bed....well..... 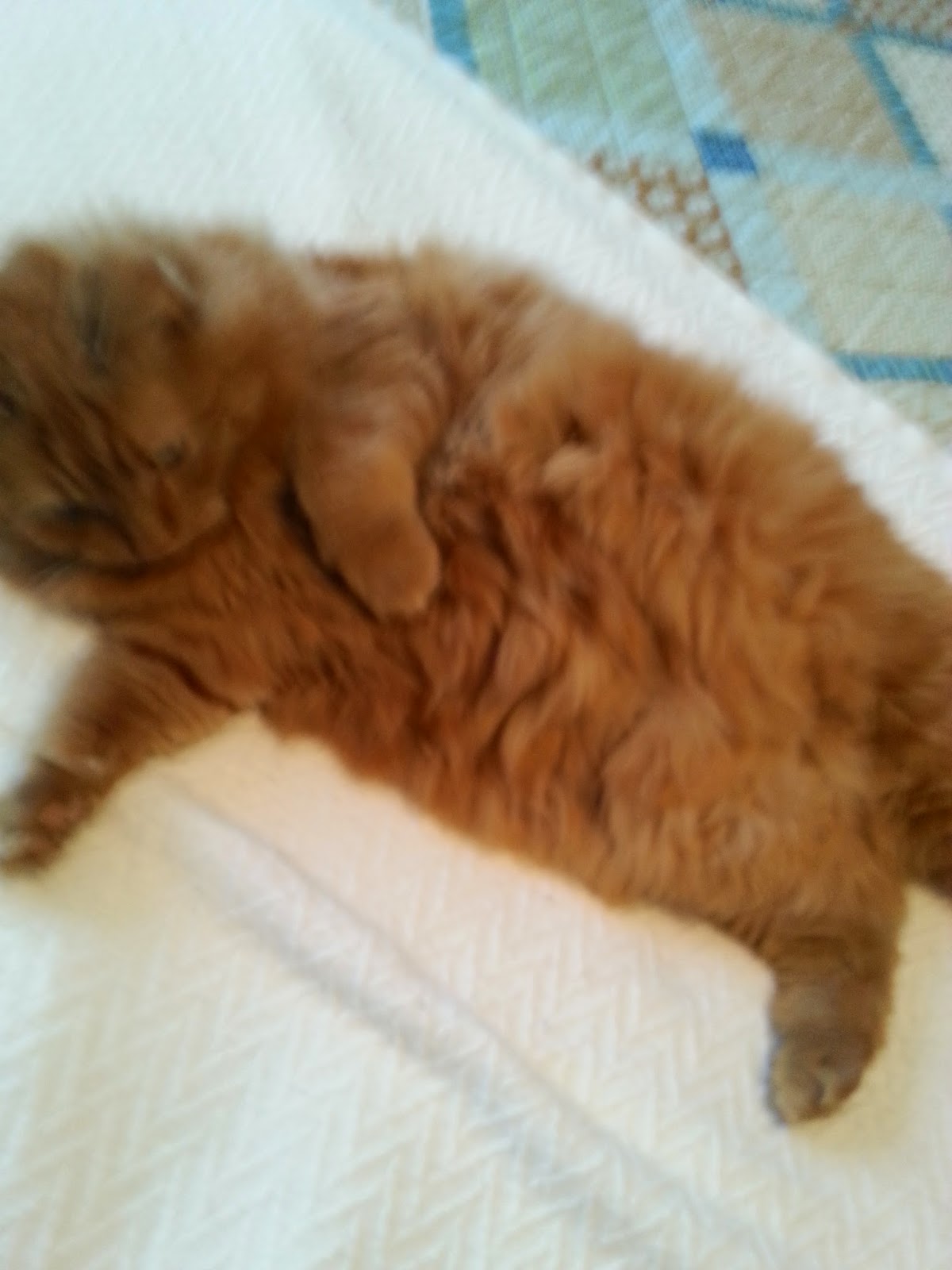 Behold...there is more than meets the eyes with her! And that's just with her exposing her belly. When we pick her up, it looks like we are holding the offspring of Chewbacca! And she is solid. Although not exactly sure of her lineage, we can't help but wonder if there isn't some Norwegian Forest Cat in her bloodlines. Her paws are about twice the size of our domestic short hair male. Yet she has these stubby legs attached to them, certainly part of the reason why she misses out on the graceful aspect.

She's actually quite a funny creature without even trying. She brings a smile to our faces almost daily, and whether it's because she's done something rather foolish or given her classic glance of utter disapproval, we can't help but laugh. 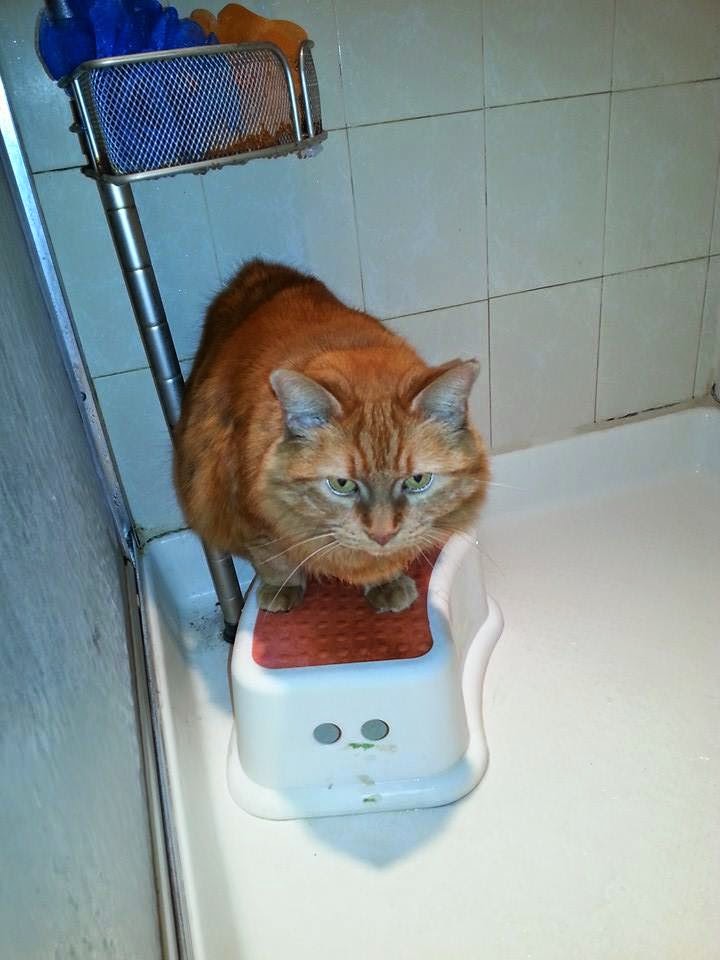 Take this morning for instance. We purposely keep the upstairs mostly cat free, but every so often I will let her visit while we get ready in the morning. When it was time to come downstairs, I went around looking for her, but just couldn't find her. I heard her bells on her collar, so I started following the sound. That lead me to the master bathroom. Well, I looked but still didn't see her, until I heard a noise in the shower. Yes, she snuck in and purposely tucked herself as far out of the way of the line of sight as possible in hopes of being able to stay up in our room! She even got up on the stool in hopes that it would help hide her better, I suppose. As you can tell, she wasn't too thrilled when I found her. 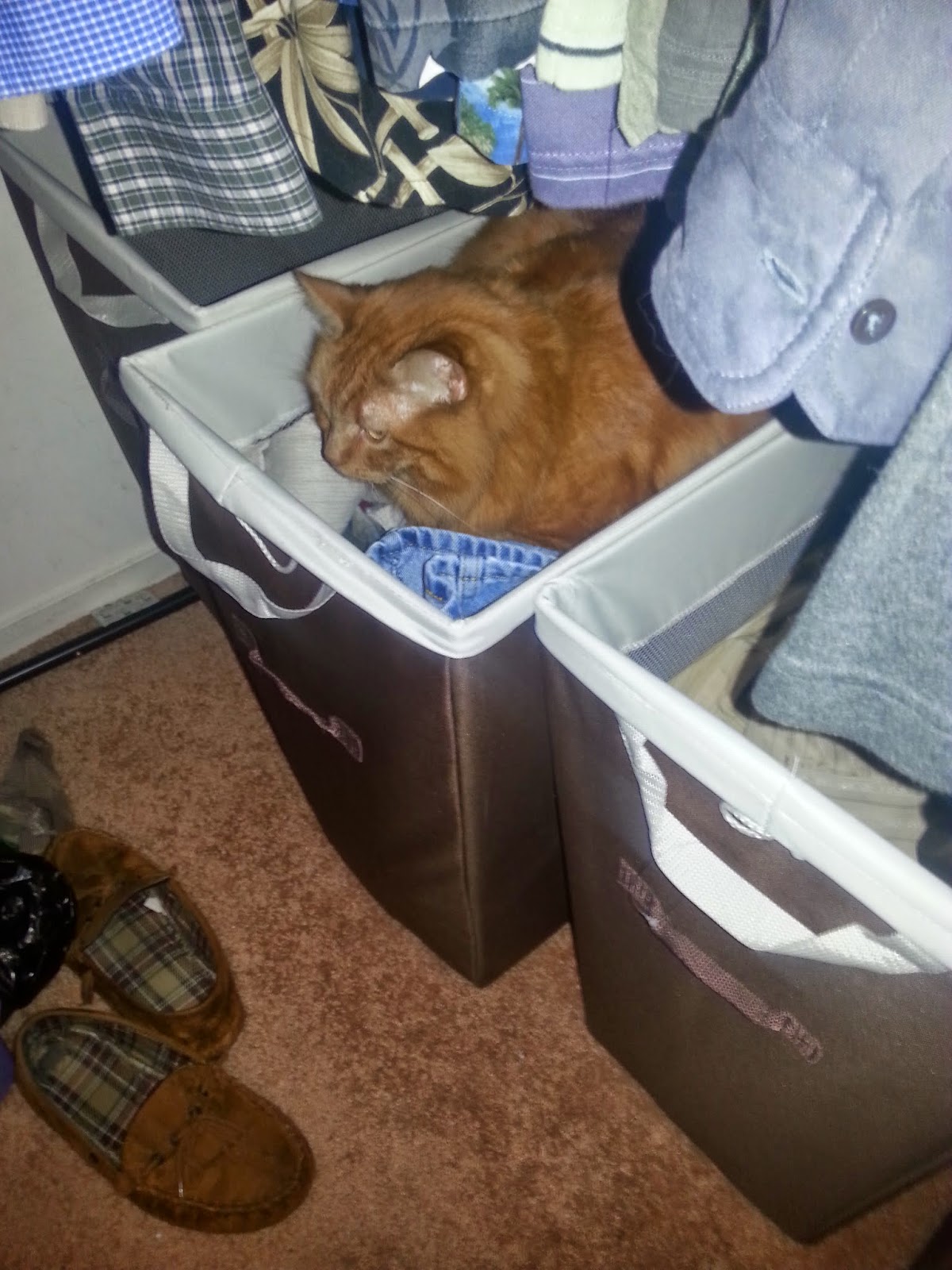 Then there was the time we really couldn't find her...at all. I was getting very worried and had that panic setting in as I went from room to room calling her name and shaking her treat bag. She always comes for her treats since we are so stingy about giving her some. When she didn't even make a peep I was convinced that she had gotten outside somehow. That meant I would need to get dressed to go out, so I opened up the closet.........and found this. She decided my husband's hamper made the perfect morning nap spot. Utterly infuriated yet laughing at the same time, I made sure to catch her in the act of her hide and go seek. Notice how she won't even look at me. 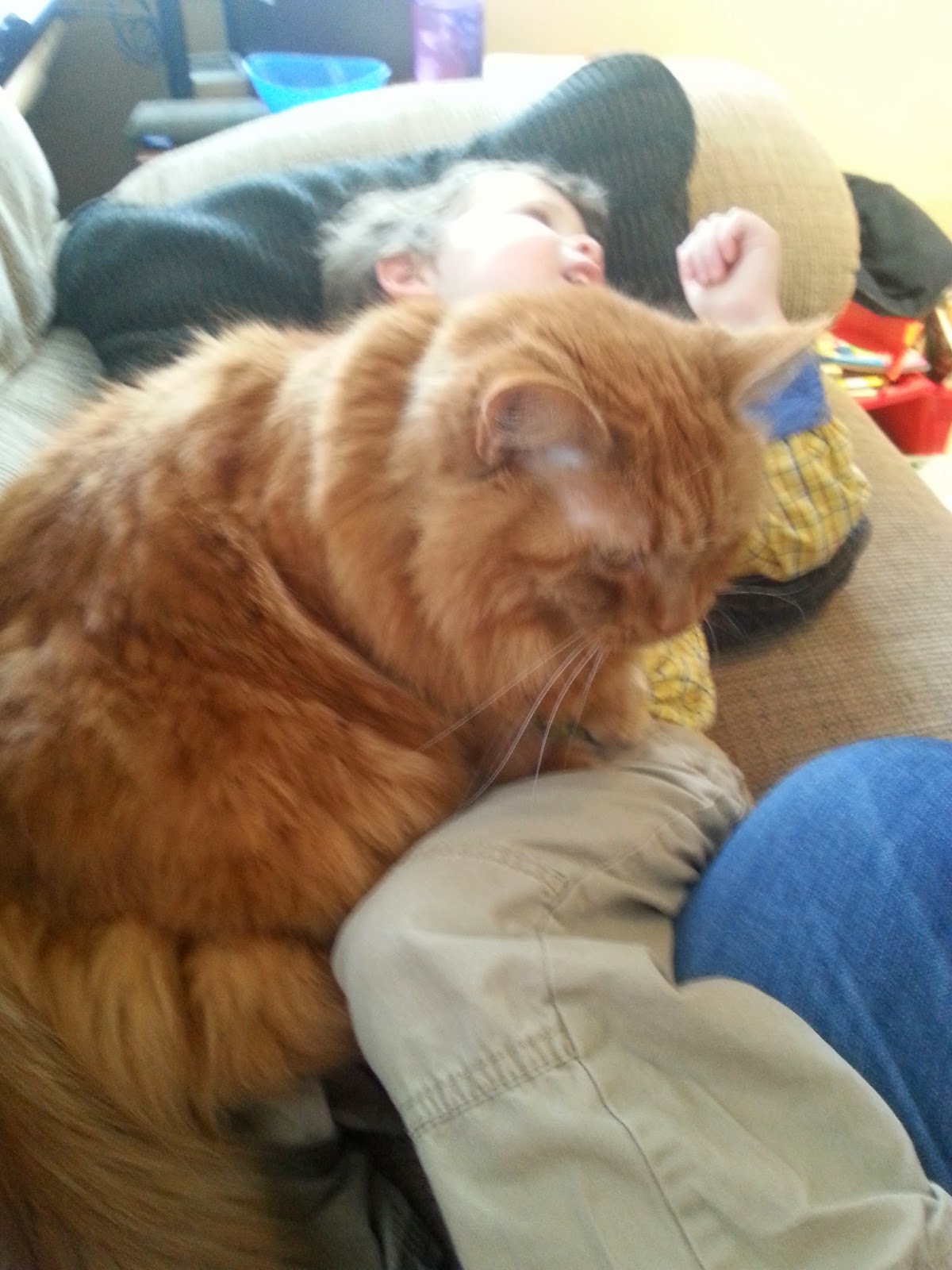 And did I mention she is massive? Who needs a blanket when you have a Queenie. My boys adore covering up and having her cuddle right on top of them. Sometimes they don't even have to get under a blanket to tempt her to come and sit. This is my youngest getting pinned, I mean snuggled. She came over and just stretched out over him. He loved it, and luckily I got a shot of the two of them in this state.

Actually, this sweet want to cuddle is a wonderful thing. She became a sort of therapy cat for me after I had back surgery. Even though I was laid up in bed, I knew I would have a nice fluffy companion next to me. Or if the nerve pain kept me up at night, I had an automatic girls' night. She literally tripped coming up the stairs the other night because she heard me moving around the house. I couldn't believe the face plant that resulted, but then again, I could because this cat truly can't jump 2 ft sometimes. Poor thing was just so excited to have some girl time. 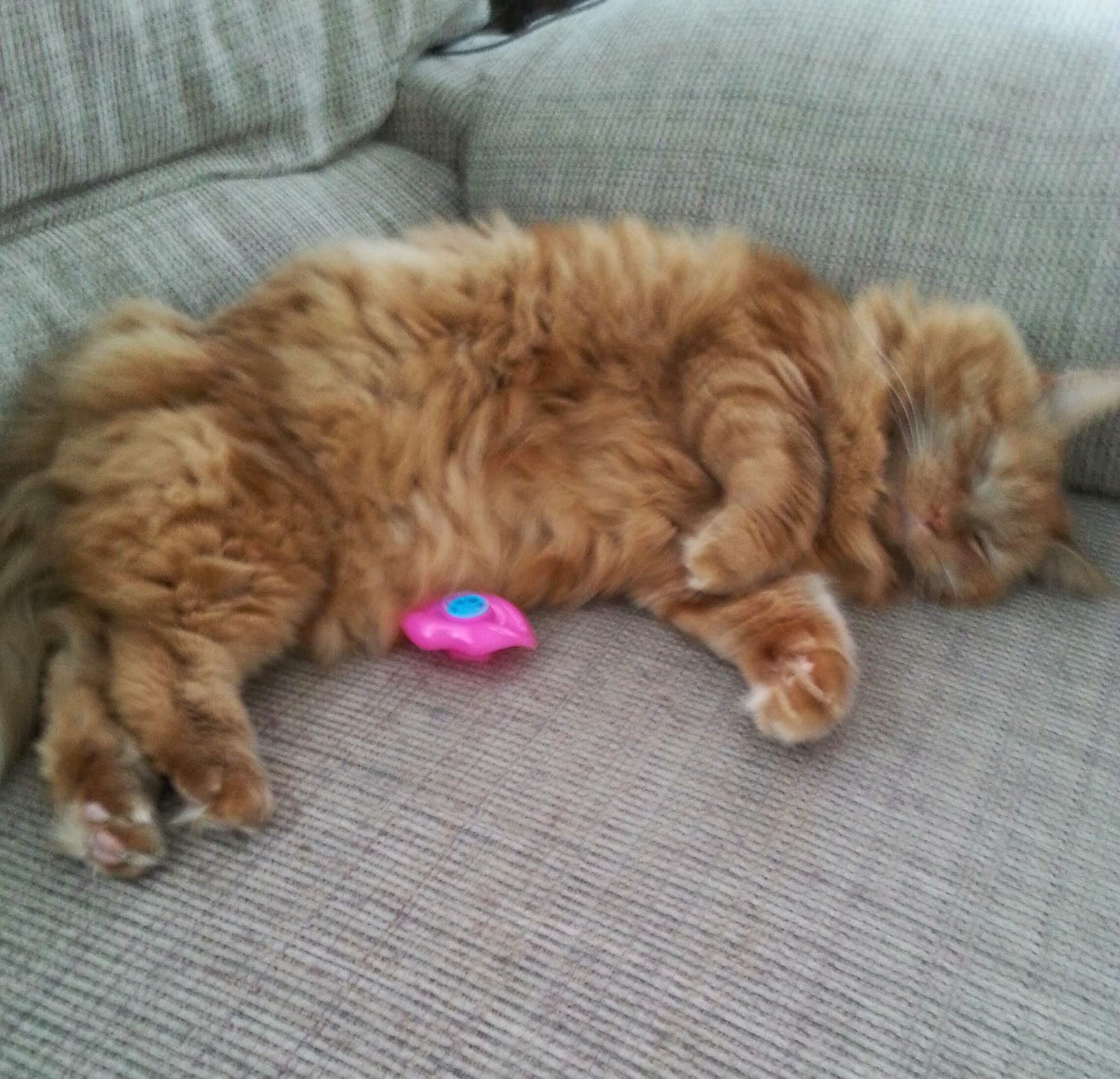 And the belly rubs, you can't believe how this cat loves them. I swear there is some dog to her with the way she just flops over to get some lovin. Of course, this flopping over sometimes can result is disastrous complications, like when she goes to roll over on the top of the love seat, and then falls off it completely.


For all her silly antics, I couldn't imagine not having her as part of our household. The truest rescue of our rescues, she's a great companion and cat. And yeah, the klutz factor just makes her all the more adorable in my book.

The queen will see you now. 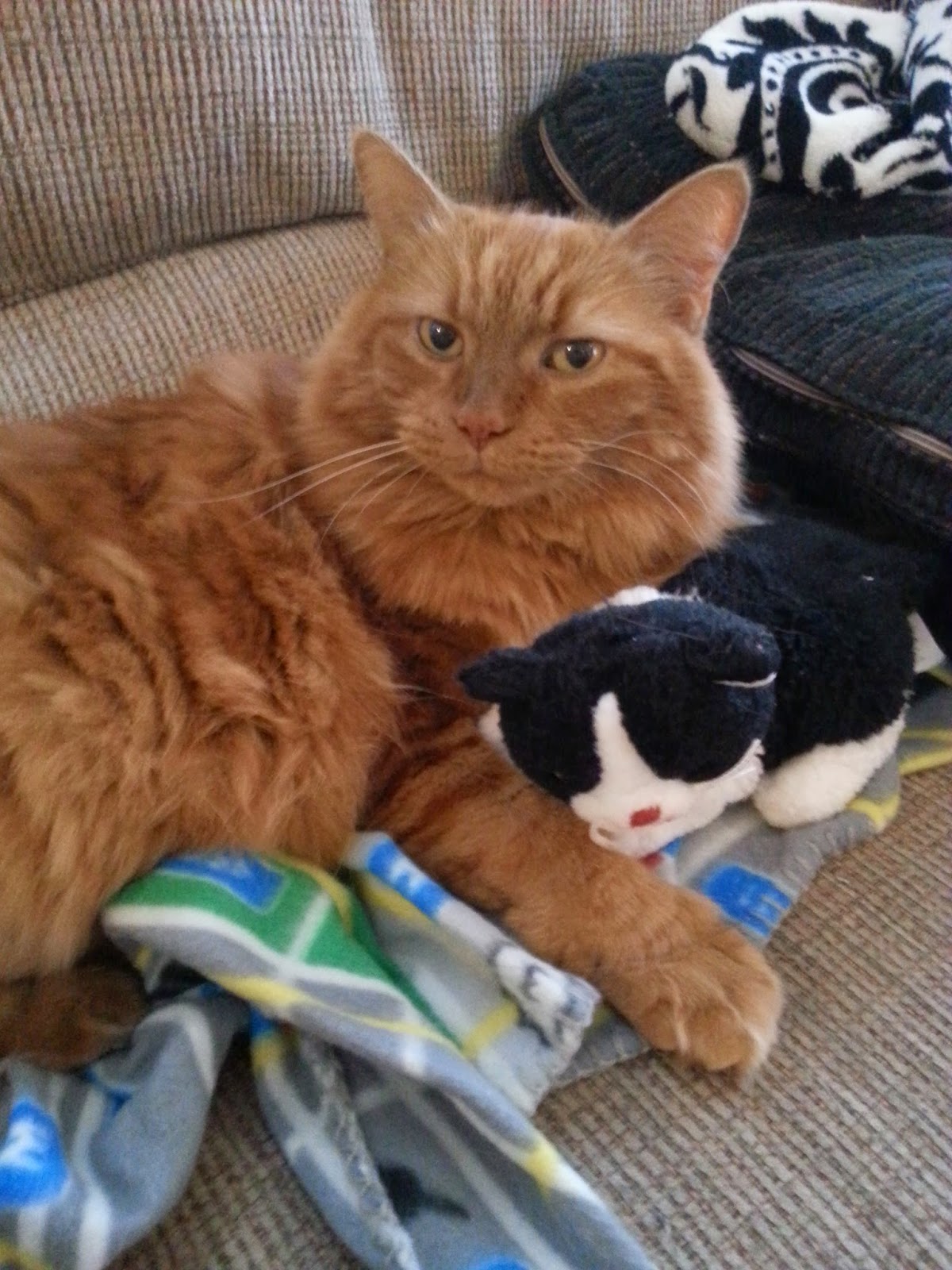